However, even if spaSPT can correct most experimental biases, there are still analysis biases to be dealt with. Most notably 'defocalization bias'. This is illustrated in the SPT experiment simulation movie shown above (red slice is focal plane). As can be seen, DNA-bound molecules remain in focus until they bleach, but freely diffusing particles rapidly move out-of-focus. This means that DNA-bound proteins give long trajectories, whereas diffusing proteins give short trajectories and biases the analysis. However, the probability of defocalization can be calculated explicitly. Building on a previous framework by Mazza, we therefore developed Spot-On. Spot-On is a modeling framework for analyzing SPT data available as a drag-n-drop website, as MATLAB package or in Python. The basic work flow is shown below. You upload your raw SPT trajectories. Histograms of displacements at multiple timelags are then compiled and displayed. After this, you can fit a model to the data (e.g. 1 Bound and 1 Free state; 1 Bound and 2 Free states) and determine the diffusion coefficients of each subpopulation and their relative sizes (e.g. 30% bound to DNA), as well as the localization error.

Overview of the workflow when using Spot-On
There are many other commonly used tools for this kind of analysis. How well does Spot-On do? We performed an extensive benchmarking analysis in the associated paper and found 2 key take-aways. First, Spot-On outperforms all other available methods and accurately and robustly infers the key parameters when tested against experimentally realistic simulated SPT data, where the ground truth is known. Second, popular MSD-based methods perform very poorly, and should be avoided.
We extensively tested Spot-On under a number of conditions and situations: e.g. only about 1000-3000 trajectories are required for reasonably accurate analysis and Spot-On can infer the localization error with ~1 nm precision as long as there is a significant (>25%) bound population. Full details are given in the 23 supplementary figures associated with the paper.
What Spot-On cannot do, is single-trajectory analysis (e.g. identifying bound and free segments of individual trajectories). For this purpose, vbSPT or HMM-Bayes are better suited. Spot-On also currently models motion as Brownian motion. We are currently interested in extending Spot-On to different types of anomalous diffusion, since it is becoming increasingly clear that most nuclear proteins exhibit some form of anomalous diffusion.

Spot-On is available as a drag-and-drop website. No coding required. Just upload your data to spoton.berkeley.edu and perform all the analysis in your browser and download publication quality figures at the end: 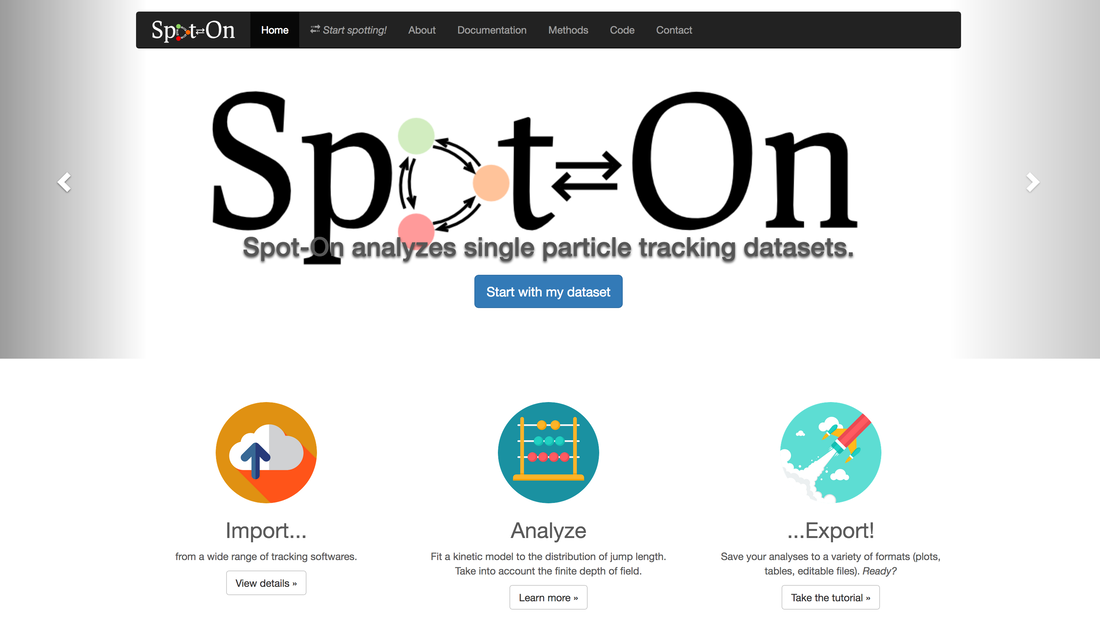 Main page of the Spot-On website: https://spoton.berkeley.edu/
The website also comes with an extensive documentation and full mathematical details on the underlying model as well as a tutorial, where you can use our raw spaSPT data as an example to explore how it all works. The MATLAB and Python versions of Spot-On are available on GitLab:If you have any comments or suggestions, please let us know. Spot-On was developed in collaboration with Maxime Woringer and if you use it, please cite the associated paper shown below:

From this we determined that an 'average' stem cell (mESC) contains ~217,200 CTCF proteins and ~109,400 cohesin complexes (or, at least, Rad21 proteins). Similarly, an 'average' U2OS cell contains ~109,800 CTCF proteins corresponding to a nuclear concentration of ~144 nM.
To illustrate how absolute abundances can give real biological insight, we were able to constrain and parameterize the loop extrusion model using these numbers when combined with our previous estimates of the specifically bound fractions (~49% for CTCF and ~40% for cohesin), and the number of binding sites estimated by ChIP-Seq (~71,200 for CTCF in mESCs). Thus, we can calculate that the time-averaged occupancy of an 'average' CTCF binding site by CTCF is ~49.9%. Similarly, we can calculate an upper bound on the density of putative loop extruding cohesin complexes: ~5.34 per Mb (if a single ring) and ~2.67 per Mb (if dimeric).
Thus, using this cell line standard, it is now possible to quickly and conveniently get the absolute abundance of any protein that is Halo-tagged. We will freely distribute the cell lines described above without any need for an MTA or other paperwork - just send us a Reagent request.

For a detailed protocol on how to carry about the absolute protein abundance quantification, please see the step-by-step Bio-Protocol written by Claudia Cattoglio.